When it comes to food on a cruise ship there are a lot of opinions. For foodies like John and I, the most overwhelming feedback I heard before our trip was: you guys aren’t going to enjoy this. From non-foodies, I heard nothing but praise. I think there’s a middle ground because I totally get both sides.

If you’ve ever read any of my vacation recaps before you know that John and I view culinary adventures as one of the top reasons to travel. You don’t just travel the world to see things, you travel the world to experience new cultures and traditions. That includes food! Regional specialty cuisine is absolutely as important as any other local custom. Some of the best meals of my entire life have happened while traveling: excellent barbecue all over North Carolina, an experience in molecular gastronomy at Alinea in Chicago, the best rustic New American cuisine at Fore Street in Maine, a Michelin rated French masterpiece at The French Laundry in California – the list goes on and on. I totally stand by experiential food discovery as one of life’s richest pleasures and absolute privileges of traveling.

Unfortunately, cruise ship cuisine is not one of those opportunities; I can confirm it falls firmly in the category of mediocre.

But – a big but – mediocrity isn’t all that bad in this context! Cruise food, as a whole, is average because it is mass produced, unimaginative, and of indistinct cuisine. However, it is plentiful, satisfying, straightforward, and I didn’t have to make it or clean up after it. Oh, and it’s all included in the cost of your cruise fare. So, for those reasons, it’s good, dare I say great.

On the Norwegian Pearl there were two dining options:
1) restaurants 100% included in your fare and
2) specialty restaurants for a nominal flat fee.

The restaurants included in the cruise fare are listed as “complimentary” though I disagree since you’ve already basically paid up front for those. In any case, on the Pearl there are 8 of these restaurants – Summer Palace, Indigo, O’Sheehan’s, Garden Cafe, Great Outdoors, Topsiders, Sky High, and Lotus Garden. I should also mention that room service is also gratis, you just pay a $8 “delivery charge.” Of the eight complimentary dining options, we tried out five:

1) Garden Cafe – Garden Cafe is the buffet on the ship, offering food from 5:30AM-9:30PM. This was the largest and most diverse food option with the biggest dining room to boot.

Every morning we got breakfast at Garden Cafe (yes, I ate cereal, grapes, and hardboiled eggs seven days straight – I’m not a big breakfast food person despite the mountains of bacon, french toast, pancakes, omelets, etc available). Garden Cafe and Great Outdoors share an outdoor seating area on the back deck of the ship with great views, which is where we ate when we came here. 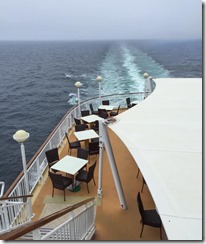 Here are a couple of other meals we had at Garden Cafe. With a buffet situation I always try to fill my plate with more than half of veggies/non-carbs so I don’t start to feel gross:

But it was vacation after all so my daily indulgence was at the soft serve machine: 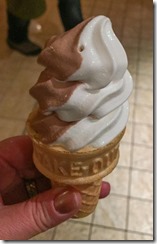 2) Summer Palace – The decor of Summer Palace is meant to evoke the feeling of a Russian imperial residence but the cuisine is basically just American.

We ate at Summer Palace once for lunch, sharing nachos, salmon burgers, and the worst cheesecake ever: 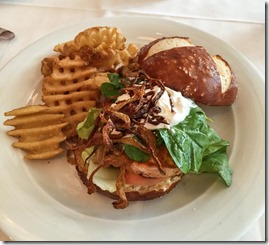 We also had dinner at Summer Palace too which was really good (despite being universally beige) – I had the potato leek soup, risotto, and chicken. 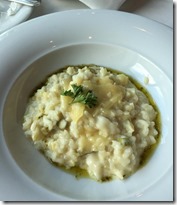 Somewhere along the line when I booked our trip I noted we were celebrating our wedding anniversary. Well, Norwegian definitely keeps tabs on this because we were presented with this special anniversary cake and serenaded in the middle of the dining room following our meal. Imagine half a dozen waiters from India signing a spirited rendition of “Let Me Call You Sweetheart.” I died. The cake was awful. 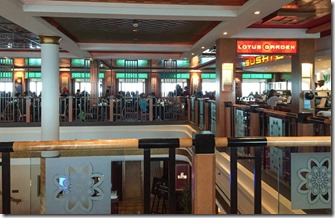 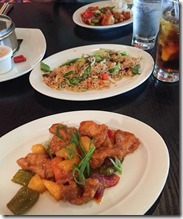 4) O’Sheehan’s – O’Sheehan’s is the “Irish pub” on board and yet they don’t serve anything particularly Irish.

One afternoon we hung out there and got some appetizers. O’Sheehan’s may be lacking in traditional Irish food but their chicken tenders were dope. 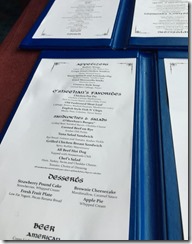 We also had a super late night dinner at O’Sheehan’s after our Juneau port excursion (O’Sheehan’s is always open). Again, chicken tenders were on point but the tuna melt was oily and bland. Don’t get me started on potato chips as a side. 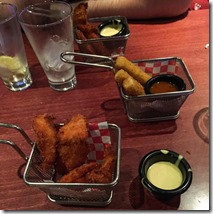 5) Great Outdoors – On Day 3 Great Outdoors hosted a “sail in BBQ” to celebrate the arrival in our first port. They had huge grills going and served all the food on the pool deck with music blasting and drinks flowing. It was kind of awesome.

On to the specialty restaurants! I respect that Norwegian understands that their guests may not want to dine with the common folk at the buffet for every meal and that, despite the “freestyle” motto of their cruise line, some upscale dining is essential. I was honestly resistant to the specialty dining options at first because the upcharge put me off a little bit (“we basically already paid for all of our meals, why would we pay more?!”). Also, as we learned at the Day 3 ‘How to Run a Floating Hotel’ panel discussion, the food is all prepared in one central kitchen anyway – there’s really nothing “special” about some of the specialty restaurants. Reservations are required for specialty dining and the informational displays all over the ship list the available reservations for that night. Of the 6 specialty restaurants – Le Bistro, Moderno, Cagney’s Steakhouse, Teppanyaki, La Cucina, and Chef’s Table – we tried 3.

1) La Cucina – La Cucina is the resident rustic Italian restaurant with a $15/per person cover charge. We shared the calamari and caesar salad (both completely average) and I had the chicken parmesan (also totally average). Overall, I was not impressed with La Cucina. John really liked it and kept making a case to return, which I vetoed. 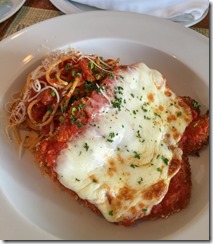 2) Moderno – Moderno is the Brazilian churrascaria on board (think meat on swords, like Fogo De Chao) which was $20/per person extra. Moderno was excellent. The buffet (like all churrascarias) had a vast selection of vegetables, salads, cheeses, cured meats, etc. They also had a delicious New England style seafood chowder. The meat offerings were decent – not as abundant or diverse as I would have liked (very red meat heavy, which I don’t eat). The dessert was this papaya ice cream which was so yummy. The value for this meal was well worth it and the ambiance was exceptional. 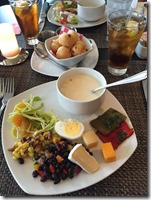 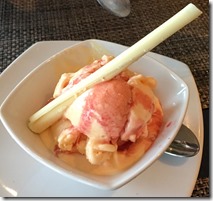 3) Cagney’s Steakhouse – Cagney’s is the steakhouse on board and the specialty restaurant with the highest cover charge: $30/per person. It’s pretty swank and they uniquely feature an open kitchen where all of the food is actually prepared. 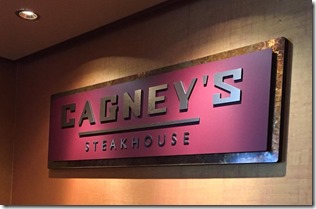 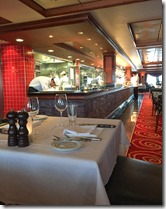 The crispy chicken wings were really good although the barbecue sauce was really strong. I also had the baked potato soup which was excellent. 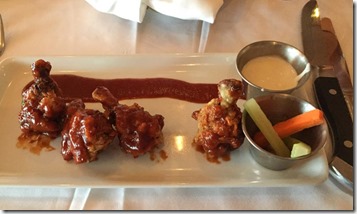 For dinner I had the chicken which was good, but average. We also ordered the oreo cheesecake which, again, was just bad (whatever the heck cheesecake recipe NCL is using needs a major revamp – call me!). 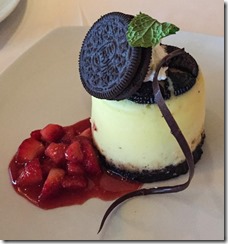 Cagney’s also must have got the memo about our anniversary because we were also presented with (the exact same bland) cake and serenaded (with the exact same cheesy song).

Overall we obviously ate very well on this vacation. Was it the best food I’ve ever had? No. Were any of these meals at all memorable? Not really. Would it deter me from cruising again? Definitely not. Was it worth the value included within the cruise fare costs? I think so.

The biggest takeaways for me were the following:

1) Running a cruise ship is hard. Even harder? Constantly feeding 3,000 passengers (not to mention 1,000 crew members). Even harder than that? Creatively figuring out how to store, prepare, and serve universally appealing food to the masses while out on the open ocean. So what we experienced, though imperfect, was really a massive and impressive feat.

2) My only real complaint about all of our food experiences on the Pearl was that the service was unilaterally bad in every restaurant – complimentary and specialty alike. Not bad like horrible errors were being made, just bad like this would never pass muster in the food service industry off the ship. I know Norwegian vigorously trains up their staff but it was really lacking those special touches that elevate service from just okay to impressive and unforgettable.

Stay tuned for my final Alaskan cruise post that will focus on all things related to the ship itself!