Get ready for Day 4 of our California to Oregon road trip recap!

Today was the day. Finally, at long last, we were headed to The French Laundry.

One of the things we really wanted to do while we were in California was eat at The French Laundry (being as obsessed with Thomas Keller as we are). If you don’t know, The French Laundry is located in the Napa Valley region of CA and is regarded as one of the best restaurant in the United States. It has several James Beard awards and was recently inducted into the Culinary Hall of Fame in 2012. So, as you can imagine, it is notoriously hard to get a reservation there. There are dozens of websites just dedicated to how to get a reservation there (here are some examples). The process is very specific – reservations open up 2 months prior, to the date, at 10AM Pacific time. I wasn’t worried though, getting a reservation at Alinea in Chicago was near impossible and we did it. And we did it again with The French Laundry. The hardest part was knowing we had the reservation and not accidentally deleting it off OpenTable. Well, the waiting was hard too. But finally, the day had come!

We woke up and had a leisurely morning. We got all primped and ready, and made the 2.5 hour drive to The French Laundry for our lunch reservation. We arrived with about a half an hour to spare, just enough time to tour the amazing French Laundry garden.

There is a plot map at the front of the garden so you can follow along.

Much of what is served at The French Laundry is sourced from this very garden. Walking around and seeing the attention and care given to everything planted here was incredible.

Not to mention that the garden is as pristine and austere as The French Laundry itself. That’s the culture here and it is nothing if not consistent and completely dedicated. 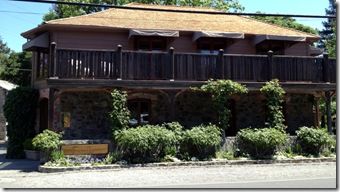 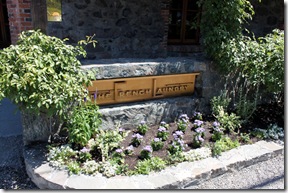 The building is gorgeous; built in the late 1880’s as a saloon and then converting into a french steam laundry in the 1920’s.

The grounds are immaculate and lush, a common theme we would discover in Napa. 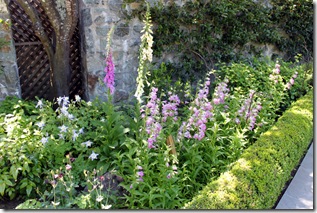 Prestige and exclusivity aside, the reason to go to The French Laundry is absolutely the food. Thomas Keller has mastered an American menu with French influences. I am going to devote an entire blog post to review The French Laundry but here is a little preview.

I had the vegetarian tasting and John had the chef’s tasting. Nine courses of culinary bliss. 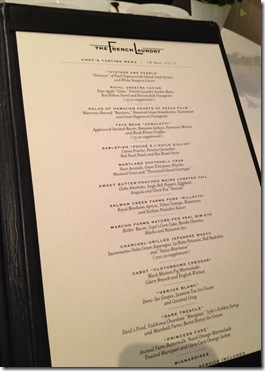 More pictures will be included in my dedicated restaurant review post but here’s just one part of our dessert: beignets, candied nuts, and handmade butterscotch and chocolate candies.

Upon leaving we got a copy of the menus and some other treats.

The French Laundry’s philosophy is to create an experience where each element is given the same attention and thought. The food, beverages, service, ambiance, staff all carry the same weight in creating an emotional dining experience. They achieve it expertly and unforgettably, and this is the reason to go to The French Laundry.

After our almost 3 hour meal, we needed to get up on our feet. We walked the length of Washington Street in Yountville which was lovely. The weather was perfection and we were already blissed out.

First we walked by Thomas Keller’s other restaurant in Yountville, Bouchon. We’ve been to Bouchon in Las Vegas (read my glowing restaurant review here) and promised each other we would come back to Napa and go to this location as well. 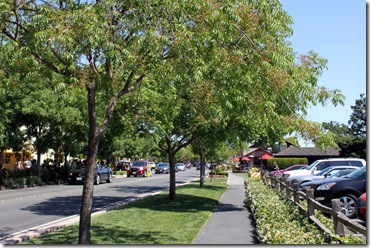 We then strolled around the V Marketplace and checked out all the shops. 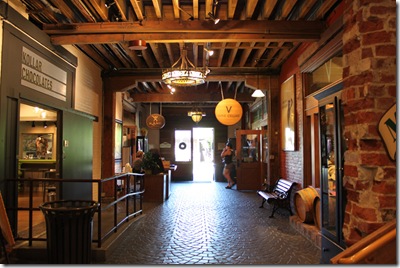 There was an awesome view from the deck of V Marketplace. Looks like they were setting up for a wedding that day! Can you imagine a more perfect location? 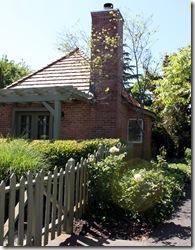 We also stopped at the Bouchon Bakery, adjacent to Bouchon and also owned by Thomas Keller.

The line was long but it was totally worth the wait.

Our waitress at The French Laundry told us something interesting – the Bouchon Bakery provides all of the bread for The French Laundry and bikes it over several times during both lunch and dinner service. She told us to keep an eye out for the bread bike! We didn’t see it though and it’s probably for the best, I would have likely tackled the rider to the ground. 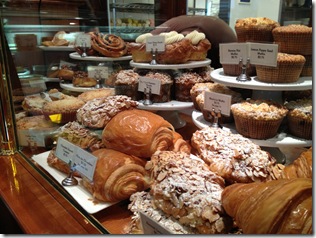 Everything looked so amazing but it was easy for me to pick what I wanted: a chocolate chip cookie. And boy was it delicious. John had a cupcake and clearly loved it.

Full, happy, and completely blissed out, we decided it was time to hit the road. We had about an hour and a half’s drive to our final destination for the night (San Francisco) but make a quick stop after about an hour in Mill Valley, CA for some walking, shopping, and dinner.

We hit up Tyler Florence’s shop in Mill Valley which was awesome. 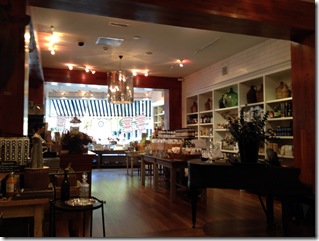 Mill Valley was completely picturesque, I have already told John that we need to go back.

Onward to dinner. We headed just down the road to Frantoio Ristorante for some very yummy Italian food.

Around 7:30PM PST we arrived in San Francisco and I crossed something off my bucket list – driving over the Golden Gate Bridge! 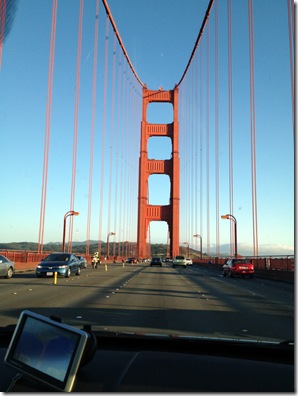 One final thought – We have already agreed that we need to go back to Napa as soon as possible. We’re thinking maybe for my birthday in 2014.  I thought I had Napa figured out from seeing it on TV and reading about it but there’s nothing like experiencing it for yourself. It was such a beautiful place. I haven’t felt this way since the first time we went to Portland, Oregon (on our honeymoon).

Stay tuned for Day 5 where we explore San Francisco!