Day 3 began with brilliant weather so I decided to check out the jogging track on the upper deck of the cruise ship. 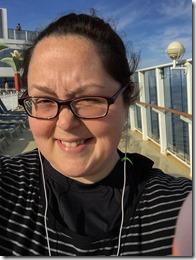 I walked laps around the track for an hour, listening to tunes, people watching, and taking in the gorgeous scenery.

We hung out for the rest of the morning and I spent some time on our balcony, watching the morning fog roll over the mountains nearby. 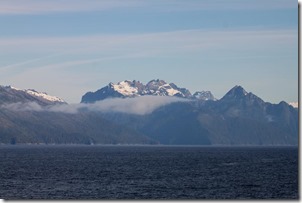 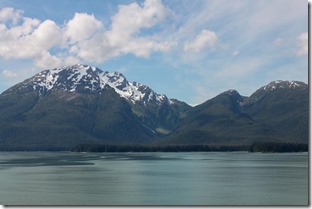 Around 2PM we arrived in Juneau. Juneau is the capital of Alaska and is actually the second largest city in the US by area (3,250 square miles). Despite its size in land, the population is only about 32,000.

Juneau is technically not an island but, because there are no roads connecting the city to the rest of Alaska or the rest of North America, it acts as one with all incoming and outgoing travel done either by plane or boat. Juneau is nestled at the base of Mount Juneau, right off Gastineau Channel. Juneau was the original home of the Native American Tlingit tribe. In 1880, gold rushers settled a town site that would later become Juneau. Alaska was granted statehood in 1959.

The economy of Juneau is supported mainly by government, the fishing industry, and the tourism industry. It was estimated that in 2005, 1 million visitors came to Juneau on cruise ships between May and September. During our entire trip I marveled at how remote Alaska is and really grasped how much tourism supports this part of the country.

Downtown Juneau was pretty small, mostly touristy shops and restaurants. I really wished John had bought this eagle shirt! (you know he loves him some eagles) 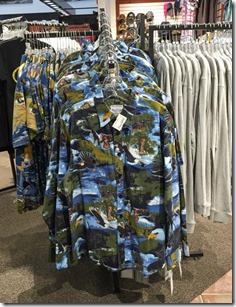 At 2PM we got off the ship to go on our first port excursion. The excursion was called Mendenhall Glacier and Whale Quest and all told was about six hours.

We loaded into buses alongside 200 other people from the ship and headed toward Mendenhall Glacier (a 20 minute drive from downtown Juneau). I had never seen a glacier before so I was pretty pumped. Mendenhall Glacier is a mountain/alpine glacier and was named in 1891 after Thomas Corwin Mendenhall. 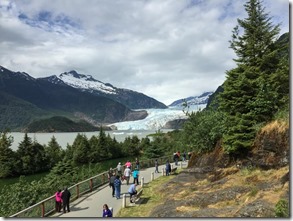 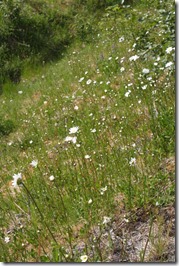 We stopped first at the Mendenhall Glacier Visitor Center. It was pretty small but they feature a video on the evolution of the glacier which was super interesting and excellently produced. They had interactive models, a lookout area, and a gift shop. 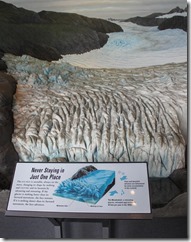 Then we headed down the Photo Point Trail to get a closer look at Mendenhall Glacier. Sidenote: there are a few trails around the area to get different vantage points of the glacier but since we were short on time, we opted for the scenic overlook trail not too far from the Visitor Center. 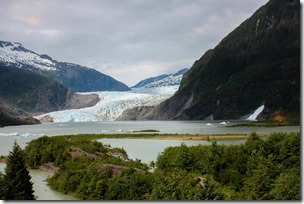 Even at a distance, Mendenhall Glacier was one of the most magnificent things I have ever seen.

One of the most fascinating things we learned about Mendenhall Glacier, and all of the glaciers we saw on this trip (more coming!), was why they appear to look blue. Basically it’s because the snow falling on the glacier is compressed, the majority of the air bubbles are squeezed out, the ice crystal size increases, and the light wavelengths absorbed are red, orange, yellow, and green so that the remaining color we see is this rich blue color. 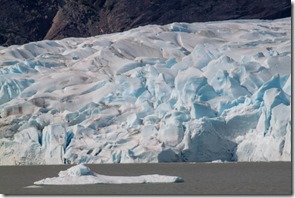 Unfortunately, because of climate change, Mendenhall Glacier has been in retreat since the end of the Little Ice Age in the 1700’s and has receded over 2.5 miles since 1500, with 1.75 miles of that being since 1958. As you may know, the EPA recently released a report outlining the scientific and economic impact of unchecked global climate change (spoiler alert: bad things). Climate action and preservation now can impact the future – I can’t stand the thought of Mendenhall Glacier having a finite lifespan. 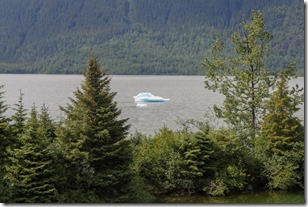 When our hour was up we got back on the bus and were driven to Auke Bay to go on our whale watch with Allen Marine Tours. There were about 30-40 people on this tour with us, much more intimate than the hordes at Mendenhall Glacier. 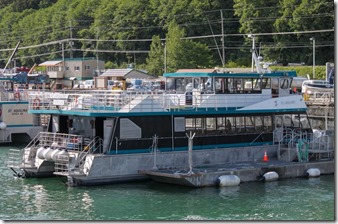 I was really excited for this tour. The description guaranteed whale sightings (and other wildlife) and the weather was incredible (sunny and 70 degrees). I was also really eager to just see Alaska. Of course we’d already gotten magnificent views from the cruise ship but this felt different – this felt like a more up close and personal glimpse at Alaska’s true character. 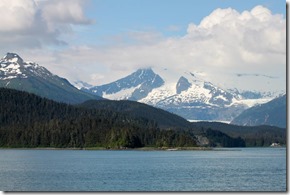 The boat ride began in Auke Bay/Stephen’s Passage, went up north through Saginaw Channel, and out to the Lynn Canal. The scenery was simply breathtaking – snowy mountains in the distance, big fluffy cumulus clouds overhead, pristine blue water around us outlined by a lush green shoreline. 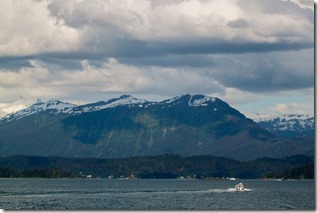 After sailing for about 45 minutes we got to the Point Retreat Lighthouse, off the coast of Admiralty Island. It was about this time that the captain slowed the boat down – this was a popular whale viewing area. 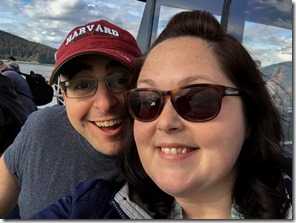 Almost immediately we began to see spouts and sprays of water. The captain let us know there were indeed killer whales nearby and to keep our eyes peeled. He and his staff began deftly and helpfully alerting us to where they were.

It wasn’t long before the orca pods were all around us. Mothers with babies, family units, adults. All kinds of group sizes. It was thrilling. John and I were awestruck.

Fun fact: Orcas are extremely social and live in matriarchal societies (orca children never leave their mothers). Because female orca can reach 90 years old, it’s possible that as many as four generations can travel together. The intricate social bonds between orca are fascinating: each pod has a unique dialect, distinct food preferences, and cultural complexities. 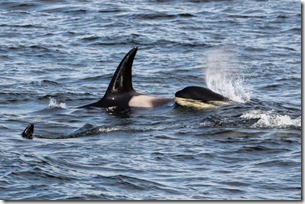 As the frequency increased, everyone grew more excited. Even the crew remarked at how unique these sighting were; they hadn’t ever seen such abundant orca groupings before, nd they run the tour! The captain was obviously overjoyed, you can hear him whooping and laughing in almost all of my videos (I recommend ‘full screen’ mode on these): 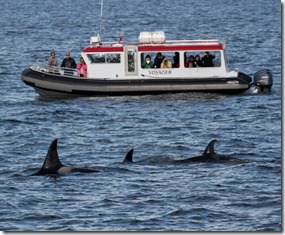 We observed these orca, engines off, for probably an hour. They were exquisite and so close, it felt like you could reach out and touch them.

It’s worth mentioning that there are strict federal and environmental regulations around whale watching (how long you can be near the animals, how fast you can go, how much noise you can make, what position the boat should be in in relation to the whales, etc), and our tour observed them vigilantly. 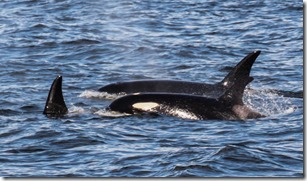 I also have to acknowledge the staff on our whale watch because they were incredibly knowledgeable about these animals. It made such a difference to have them posted around the boat, encouraging questions from us, and expertly answering them. This wasn’t just an fun excursion, it was educational as well and so much more meaningful as a result.

After that spectacular show, the captain took us back down the channel in search of other wildlife (oh yeah, there are more than just orca here!). John got a snack and I continued to snap pictures of our surroundings with my amazing telephoto lens. 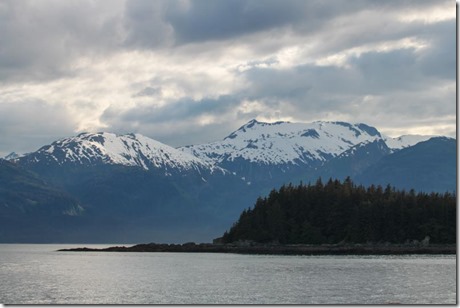 As we went back through the channel we got a completely new view of Mendenhall Glacier.

Also on the cliffs of the channel we saw a deer. Not the wildlife we were expecting but really cool nonetheless. 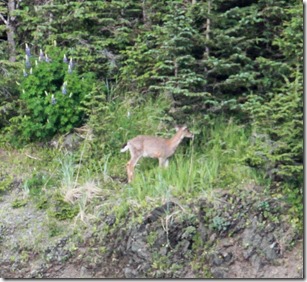 On the last leg of the whale watch we slowed through Favorite Channel because there was some buzz that a humpback whale was nearby. To our amazement, there totally was! 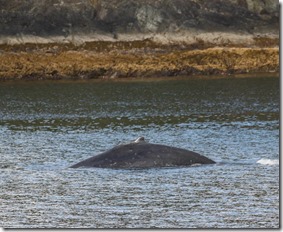 The calf was extremely playful, rolling around and waving its fins.

Fun fact: Humpback whales are migratory – spending their summers in Alaska, swimming roughly 3,000 miles from Hawaii where they spent their winters. Alaska is rich in krill, plankton, etc. in the summer and they can eat up to one ton per day. Humpbacks feast all summer to fatten up for the winter, as they don’t eat much during that time, if at all. When they migrate to Hawaii for the winter they spend that time mating and giving birth. Then swim 3,000 miles back to Alaska for the summer. 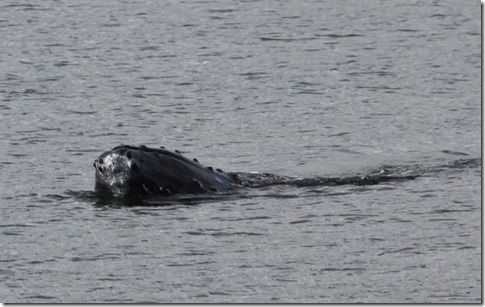 While the calf entertained us with its frolicking, the mother was busy deep diving for food. The deep dive is usually when you see the beautiful tail fin of the humpback whale. If it weren’t for the incredible staff on the boat pointing out the telltale pre-deep dive signs, I probably would not have captured these pictures.

We stayed with the humpback whales for about 30 minutes and then had to head back to shore. The final bit of wildlife we saw on the whale watch were these sea lions on this buoy, picturesquely in front of the Mendenhall Glacier. 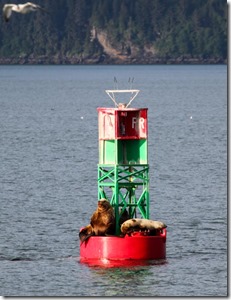 These Steller sea lions are extremely territorial so it was really funny to watch them defend their spots on the buoy, aggressively barking at each other and even pushing each other off the buoy.

As we proceeded to the shore John and I went down into the enclosed area of the boat to hear a recap of the trip from the staff on board. They treated us to some fine Alaskan salmon and told us even more about all of the wildlife we had seen that day. 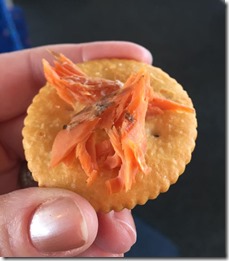 Just before we returned to shore I went up to the back of the boat to enjoy the scenery of Auke Bay one last time. This place felt so magical to me. Not only because of the natural beauty and the stunning weather, but because of the amazing wildlife we were privileged to see that day.

It dawned on me that I’ve probably only ever seen these types of animals in captivity, if at all, but definitely not in the wild. Their transient behaviors made me think about how much of this world they need in order to live, breed, and be free. As humans we often think that nature belongs to us, for our consumption or entertainment. But it’s not. These animals do not belong to us – in aquariums, in zoos, at Seaworld. We need to respect what is wild and only enjoy it morally and humbly.

Observing nature, untouched and pristine, is our obligation. This idea quickly became the theme of our trip to Alaska and has stayed with me since.