Day 7 was the last full day of the cruise and it definitely started with some end-of-vacation dread on my part. I hate getting bummed out that vacation is ending even before it’s over. I truly existed in a bubble on this particular vacation (kind of rare for me!) and had a hard time thinking that it would be over soon.

But, we made the most of it, enjoying a leisurely morning on the ship, relaxing and vegging (watching movies, walking around, playing cards) as we did every other day. We wouldn’t be arriving in our port du jour until 6pm so we had a lot of time during the day to soak up the last day of this awesome cruise. 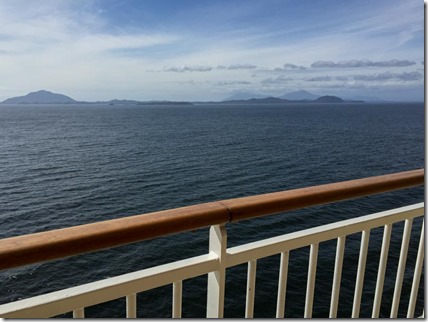 At 2PM we went to the main theater to check out the last big show of the cruise – Tim Kaminski’s stand up. The Stardust Theater was packed; there was not an empty seat in the house. The capacity is 1,000 people which is about a third of all the guests on the cruise. Pretty incredible turnout. Tim’s show was great. I wasn’t sure what to expect humor-wise because the people on the cruise were so diverse, but he did a lot of cruise humor which actually was really entertaining. 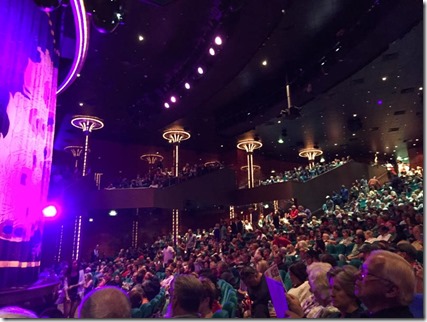 At 5:45PM we cruised into the Inner Harbor of Victoria, British Columbia and disembarked promptly at 6:15PM after the boat cleared Canadian customs.

A sidenote here about embarking/disembarking on the cruise ship that I don’t think I’ve mentioned before: Our entire trip was on time (like sharply on time) everywhere we went. If the scheduled arrival was at 8AM, we we docked at 8AM. If the assigned departure was at 2PM, the ladders and tethers were up at 2PM. This was mostly due to the exceptional staff of the Norwegian Pearl, the security, and the ease of the process, but also the passengers cooperation. Each time we unloaded and loaded at a port, I was super impressed at how smooth that process went.

Victoria was a visual shock when we arrived – it was an actual city! with buildings! tall ones! – it looked unlike any other port we had visited. Again, I cannot get over the weather we got on this trip. Total dumb luck but I’m still thrilled.

(Bizarro Harry Reid and I had a wonderful time in line together.)

Our time in port was limited to 6PM-11PM, the shortest stop of our trip. The only thing we had planned for our visit to Victoria was to hang out with my dad and his wife, Ildi. My dad lives in Vancouver so I only see him about once a year. When we booked the cruise ages ago I let him know we’d be somewhat close by (a few hour ferry ride for them) and we made plans to get together.

We met up with them in the port parking lot and headed to dinner. We went to Blue Crab Seafood House right on the water. Our meal was delicious – super fresh seafood – and an absolute meal highlight of the trip. Cruise food is pretty lackluster (a full post coming shortly on that) so eating off the boat was a treat! 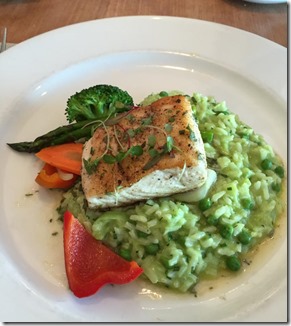 My dad and Idli have been to Victoria many times so they toured us around the city and downtown areas until we had to go back to the ship. We first checked out the British Columbia Parliament Buildings. 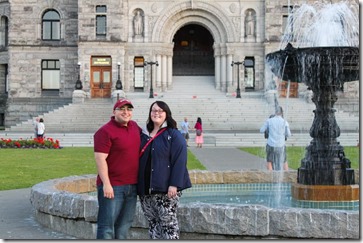 The grounds of the Parliament Buildings cover 12.5 acres and include gorgeous neo-Baroque style buildings, standing since 1898, and lush gardens. 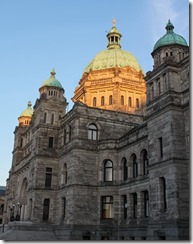 A statue of Queen Victoria stands on the front lawn. 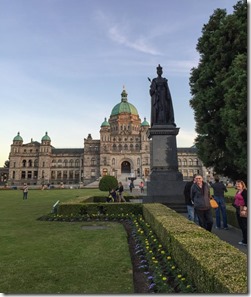 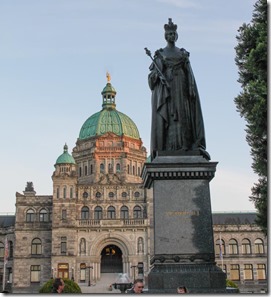 As does this magnificent tree. I caught the most gorgeous sunset light in its branches. 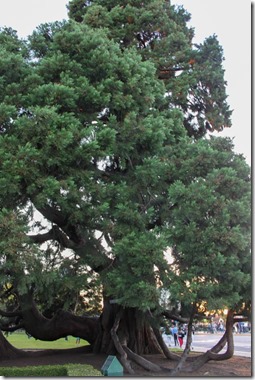 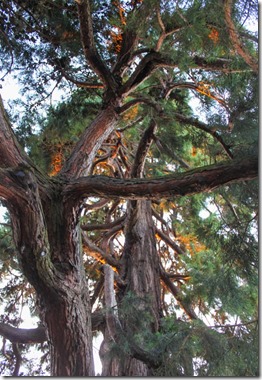 The Inner Harbor was really lovely – I could have stood there all day and people watched. We caught the sunset just around 9PM which was beautiful. 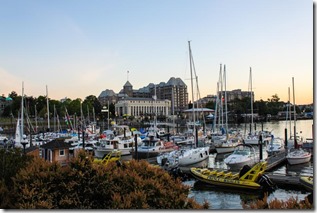 If the Parliament Building is the most historic landmark in Victoria, the Fairmont Empress Hotel is a close second.

The hotel opened in 1908 to serve business people and tourists. The hotel is an Edwardian, château-style hotel, has almost 500 rooms, and overlooks Victoria’s Inner Harbor. After decades in use, debate over the hotel’s dilapidated condition began in the mid 1960’s. Locals argued about whether or not it should be torn down and replaced with a flashier high rise hotel. Instead, the Empress underwent a $4 million renovation and refurbishment in 1966. In 1989, over $45 million was spent in additional restoration on the hotel. In 2014 the hotel was sold to new owners who are now investing $30 million in, yet another, renovation project. 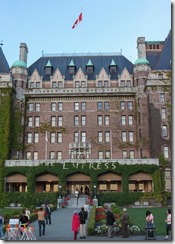 The Empress is well known for its classic Victorian afternoon tea service in The Tea Room. They serve over 800 guests daily in the summer months! We walked by the Tea Room as we toured through the hotel and it was exquisite. That’s definitely going on my bucket list! 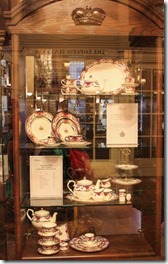 We walked around downtown for an hour or so, taking in the sights and sounds.

We got some gelato for dessert on our walk. I got chai latte gelato which was insanely good. I have already recreated this recipe at home (stayed tuned for that recipe blog!). 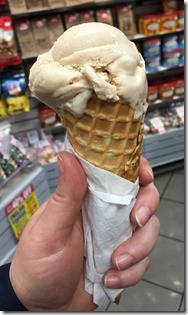 Our final stop in downtown Victoria was Rogers’ Chocolates. The first Rogers’ chocolates were made by Charles Rogers in 1885. In 1891 he opened this shop downtown and it was an instant success. Rogers’ Chocolates now operates a 20,000 sq. ft. factory, nine retail stores, and serves over 50 countries. I totally see why – the chocolate was decadent and delicious.

At 10PM we headed back to the cruise ship and said our goodbyes. It was awesome to see my dad and I can’t wait to go back to Victoria someday, it is a beautiful city and we fell in love with it.

Stay tuned for our final vacation day in Seattle!