Get ready for Day 8 of our California to Oregon road trip recap!

We planned to end Day 7 in Medford, Oregon so we could wake up in our first destination of the day and not have to get on the road right away. Up first on the itinerary – a tour of the Harry and David factory, conveniently located in Medford!

Who doesn’t love the Harry and David company? Established in 1934, Harry and David, sons of founder Samuel Rosenberg, created a mail order catalog built up from their father’s Comice pear selling days. 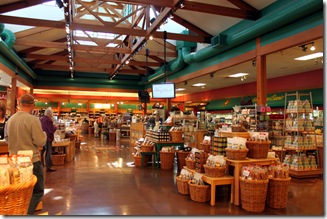 The tour met up at the Country Village Store and a little Harry and David minibus drove us up to the factory.

The first stop – the Moose Munch production line! How awesome is Moose Munch? John is addicted to the stuff so I try to always buy him a few bags for his birthday or for the holidays. Can you tell how thrilled he is in this photo? 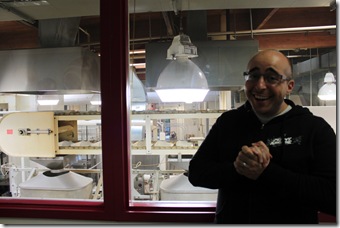 We saw the whole process of how Moose Munch is made – first the butter, sugar, and flavorings are mixed in a big drum to make the signature caramel sauce and then plain popcorn is added.

The caramel and popcorn are mixed together, then any add ins like nuts or candy are added, and then the whole batch is dumped out on to a belt to cool and to later be sent to packaging. So awesome! 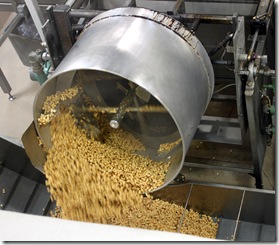 Following the Moose Munch area we got to see the rest of the candy production part of the factory. This included the truffle packing line and the room where they make chocolate covered cherries. 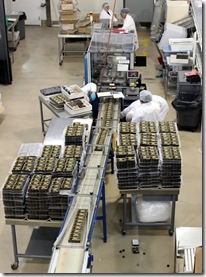 We also saw where they assemble the sandwich cookies and where the Moose Munch goes for packaging. 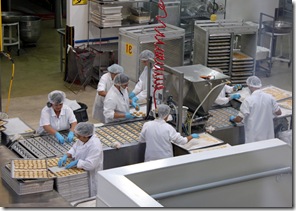 The last stop was the chocolate room where they have a huge enrober that is constantly covering cookies and candy in chocolate! 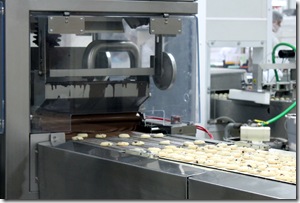 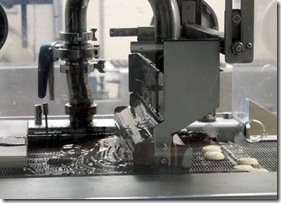 We hopped back on the bus to go to the packaging and shipping facility. On the way we got to see the original pear orchards that Samuel Rosenberg purchased in 1910. They are still producing perfect Comice pears that are sold through the company.

The packaging and shipping facility was enormous. It was fairly quiet during our tour as it was the off-season in May but during peak holiday season (October through January) this place is apparently a zoo. We walked along a catwalk (made with wood from the original Harry and David factory) that overlooked the packaging floor. The packaging area is also where they do all of their custom wrapping and hand bow making.

We also saw the assembly line areas for the fruit of the month club boxes and gift baskets. 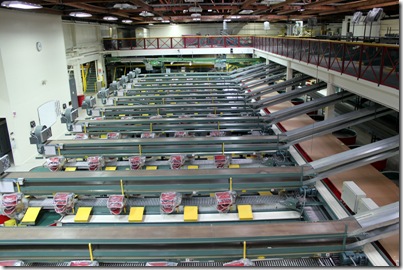 The whole tour was a little over and hour and it was really informative. I already loved Harry and David’s products but now it will be a little bit more special when we enjoy them because we’ve seen how they are made and where they come from.

At the end of the tour each person was given a special box of treats: truffles and cookies. Yum! 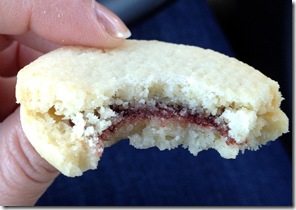 Of course we hit up the Country Village Store and bought a ton of Moose Munch. 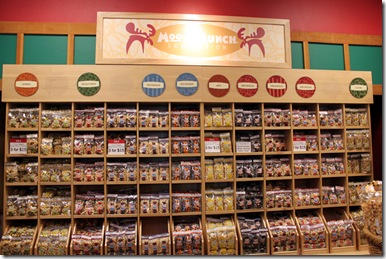 We grabbed some sandwiches before leaving Medford since we would be taking another drive up in to the mountains and weren’t sure if there would be a lunch place to stop at up there.

Onward! We had about a 2 hour drive ahead of us to get to Crater Lake. An hour or so into the drive we pulled over to check out the Rogue Gorge Viewpoint. 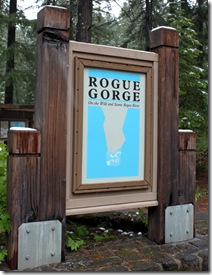 This area was so quintessentially Oregon: lush, verdant, full of fresh, clean air, and just beautiful.

Oh, and did I mention it was snowing? This continued our snow adventures from the night before and, little did we know, it was about to get worse.

We snapped a few pictures and then ran back to the car – it was cold!

As we drove toward Crater Lake the snow continued to fall, getting heavier as we drove higher in elevation (about 6,000 ft). Still, we continued on.

When we arrived at the Crater Lake park entrance (about a 30 minute drive from the lake itself) the park ranger told us they expected 4-5 inches of snow that day. In an almost marriage ending rookie movie, I insisted we keep going up to the lake to which John vehemently disagreed. The roads were not plowed or salted so it was a scary drive up there. And with us fighting the whole way (real talk), it was not a high point of the trip.

Oh, and once we got up there? We obviously couldn’t SEE anything because of the clouds and snow.

Overall, that experience sucked and I should have known better. But at least we’re laughing about it now.

Because the road conditions were so crappy we burned up a lot of time driving. When we finally got out of Crater Lake we realized we had 2 hours to drive to Bend, OR for our 4PM tour of the Deschutes Brewery. It was 2PM and we thought we’d miss the tour entirely. That didn’t add to our moods at all but somehow we got to Bend at 3:59PM and miraculously were allowed to hop on the 4PM tour. So thankfully, it all worked out. I’ve mentioned road tripping stress before and, while it isn’t pleasant, and you definitely don’t want to be squabbling with your spouse on vacation, it’s just something you have to deal with. Thankfully we got over it quickly and didn’t let it ruin our day (or trip).

On to the Deschutes Brewery tour! 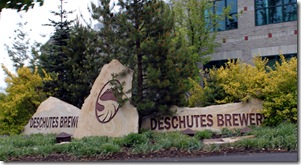 We each got a hop leaf to tear open and check out/smell. I’m not a hops fan but this was really cool. 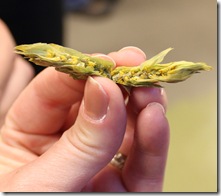 The brewery itself isn’t huge but we toured the brew kettle room, hop room, fermenting area, and the bottling/packaging facility. 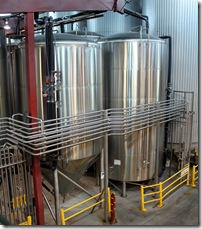 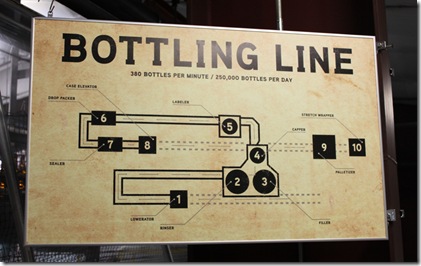 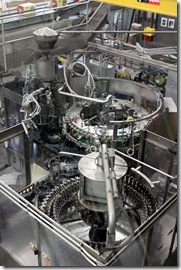 And, of course, the tour ended in the taproom. 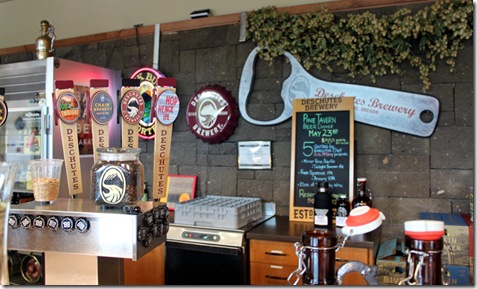 I tried the Twilight Summer Ale (very tasty!) and the Imperial Smoked Porter. The Smoked Porter was incredible, it literally tasted like smoky BBQ! 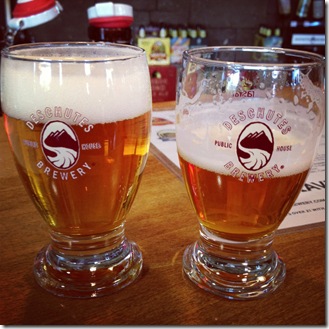 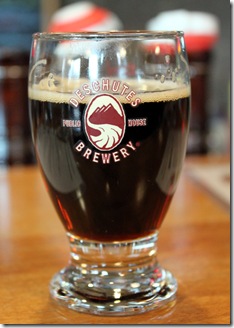 After the tour it was time for dinner. We figured ‘when in Rome,’ so we headed to the Deschutes Public House. The public house is about 10 minutes from the brewery and serves all their beers on tap and uses the spent grains to make bread, veggie burgers, and garnishes. There was candied spent barley on top of my salad and it was awesome!

As we were leaving Bend we spied a food truck that we could not resist for dessert: Glazed and Amused Doughnuts. 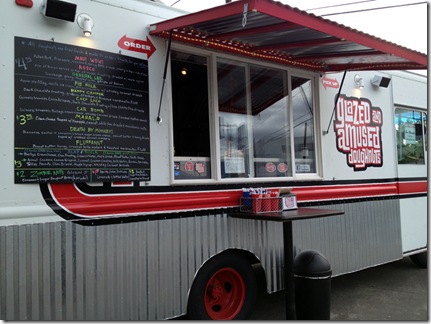 We got the zombie nuts (doughnut holes) and the Smores doughnut. All freshly made to order and super delicious! (Also coma inducing.) 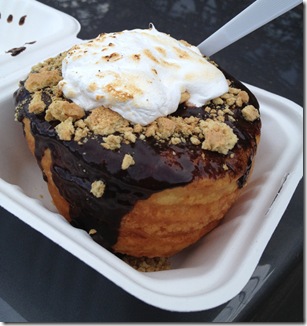 As the sun set we drove the last leg of our trip that day – 30 minutes to Sisters, OR. 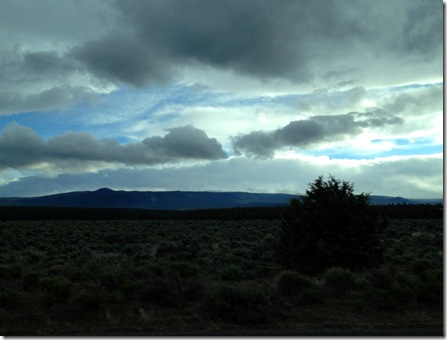 Our final destination for the night was the FivePine Lodge where we had our own private cabin.

This was, hands down, my favorite place that we stayed on our trip. I fell in love with FivePine, and Sisters, immediately. 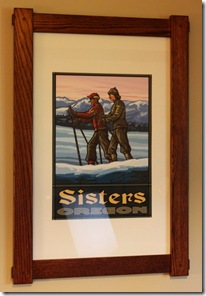 The room was rustic but luxurious, with a huge tub and big fireplace, and the biggest comfiest bed I have ever laid on. Our trip was awesome up until this point, and I was really excited to continue on to Portland, but I seriously did not want to leave here. Everything was so peaceful and quaint.

Stay tuned for Day 9 when we finally arrive in Portland!