I don’t think I’ve ever actually done a record review here on the blog despite wanting to. I can’t think of a better way to start then to review Paramore’s new self titled record.

Quick background: Paramore formed in 2004 in Franklin, Tennessee as a 5 piece band. They released All We Know Is Falling in 2005, Riot! in 2007, and Brand New Eyes in 2009. In December 2010 the lead guitarist and drummer left the band in a flourish of drama that left the future of Paramore uncertain. In early 2011 the remaining 3 members of Paramore (Hayley Williams, Jeremy Davis, and Taylor York) made it clear that the band wasn’t going anywhere. They came out with a new logo, got tattoos of it, and put out the single Monster for the Transformers 3 soundtrack. They spoke actively about being a three piece and how the spirit of Paramore wouldn’t change just because the members had. In late 2011 Paramore released the Singles Club EP with 4 songs on it. The Singles Club was a way to get new music out after two years without. In December 2012 the band announced that their self titled record would be released on April 9, 2013. That pretty much brings us up to now.

I have been a Paramore fan since All We Know Is Falling came out. The content of their songs and musical energy moved me in a way that felt different from all the other pop-punk I was listening to at the time. Discovering Paramore felt like filling a void I didn’t know I had. Over the years I have followed them obsessively; devouring everything they have released. Isn’t that the beautiful thing about music? Discovering something and wholly absorbing every single piece of it. Now that feels like home to me.

When the lineup changed I wasn’t sad, only worried that the band would call it quits. I was so relieved that they didn’t. So it goes without saying that the (four year) wait for this new record seemed like a lifetime to me. But finally, it is here and I can fully immerse myself in it forever. I don’t know what’s better – the first listen, the repetition over and over, or the full memorization of a really great record. I suppose it’s like a relationship in that way. All the phases are satisfying but intimately knowing every single note and every single word of a song, of a whole album even, is what I love the most about being a fan of music.

1) Fast In My Car – What a rip roaring opener! This song has chunky guitars, a good beat, hallmark Hayley vocals. It’s semi aggressive but playful (“We’re driving fast in my car/We’ve got our riot gear on but we just want to have fun/No, we’re not looking for violence/Tonight we want to have fun”). But most of all it completely lives up to it’s name: this song is going to be the perfect windows down, full sing-along, summer jam.

2) Now – Now was released as a single on January 23, 2013 and I have been listening to it nonstop since (the 96 count hit on my iTunes speaks the truth). I didn’t appreciate how representative of the record this song was until I heard the entire album. It really is the perfect first single. The lyrics tell a story about exactly what the focus of the band is and what the theme of album is (“Feels like I’m waking from the dead and everyone’s been waitin on me/Lost the battle, win the war/There’s a time and a place to die but this ain’t it.”). Plus, the video for this song is really pretty awesome.

3) Grow Up – Upbeat tune about how growing up means staying super posi and leaving behind everything that brings you down. The synth beats are awesome. I’m loving the Postal Service vibe at the end.

4) Daydreaming – I got really excited to hear this song when Hayley posted the lyrics on her blog. Daydreaming builds on itself really well, with poignant verses and a really powerful chorus. Incidentally, this was the first song the band recorded for the album.

5) Interlude: Moving On – Stripped down to just Hayley’s voice and a ukelele. It’s a great pairing. The song is about just about letting go and getting on with life.

6) Ain’t It Fun – Completely funky, lots of bass, and the full choir in the background is a game-changer. Hayley really goes to a new place with her vocals in this song – so bluesy and soulful. The lyrics playfully jab but are delivered with intent (“Ain’t it fun livin’ in the real world/Ain’t it good being all alone/Don’t go cryin to ya mama cause you’re on your own in the real world.”)

7) Part II – Part II is the follow up to the Riot! song Let The Flames Begin. This song opens with the pop jangle reminiscent of R.E.M. and The Strokes, and then graduates into a rock anthem about survival. (“What a mess, what a mystery we’ve made of love and other simple things/Learning to forgive even when it wasn’t our mistake.”) I love everything about this.

8) Last Hope – When I heard this song for the first time I immediately knew it was my favorite song on the record. The simplicity of the song paired with the stripped vocals, banjo twang, and piano allows the emotion of the song to come to the forefront. (“And the blood in these veins isn’t pumping any less than it ever has/And that’s the hope I have/The only thing I know is keeping me alive.”)

9) Still Into You – When Paramore debuted this song as SXSW I wasn’t super impressed. They simultaneously released the lyric video which was kind to us diehard fans who prefer to listen and absorb the studio version rather than the live version. But as I’ve given it several listens I can’t help but be addicted to it. Still Into You is a super catchy, adorable pop love song. I’m totally hooked.

10) Anklebiters – This song is a perfect punk rock jam right out of the gate. Gang vocals, fast chorus, guitar feedback, and heck, even some bells in the background. This song is going to be so fun live.

11) Interlude: Holiday – Oof, easily the worst song on the album. It’s a lilting She & Him ripoff without any musical or lyrical significance. This should never have made the final cut for the album. I actively dislike this one.

12) Proof – Badass love song. Totally reminiscent of old Paramore. The lyrics and the music are totally on point on this song. It took a few listens to fully appreciate this one but it is definitely one of my favorites on the whole record.

13) Hate To See Your Heart Break – A tender, sympathetic song. I hear so much No Doubt influence in the song specifically in the vocals, they are very Gwen/Return To Saturn-era sounding.

14) [One Of Those] Crazy Girls – I’m pretty ambivalent to this song. I don’t love it, I don’t hate it. As far as modern day torch songs go, it’s got a fun vibe and is really catchy.

15) Interlude: I’m Not Angry Anymore – Ok, we get it, you went through some shit and it sucked. This tongue in cheek song doesn’t add anything to the record, in fact it may be the song that makes the band’s openness about their hardships totally overkill. They really should have omitted all of these “interludes” from the record.

16) Be Alone – This and Proof are two songs about relationships that I totally relate to. I’m so glad Paramore went to this dark, mature, complicated place with a love song. (“You should be alone/You should be alone with me/Yeah, we could be alone/And never get too lonely.”)

17) Future – The melancholy vibe of this song is so real. I could get lost in it. I knew at the first note that the outro build up was exactly what I wanted from this song. When Future busts wide open at the end, the album has its much deserved perfect moment. 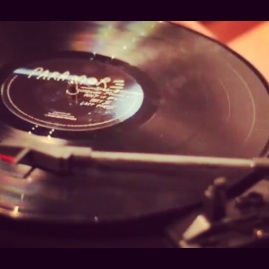 I was able to write up such a comprehensive review and have it posted today, the record release date, because last week the band did a four night event releasing a quarter of the album each night called 4 Sides 4 Nights. So I’ve been listening to and enjoying the album since April 1. That also means I had a lot of time to think and reflect on it which makes for a better review (I think, definitely a super long one anyways, oops).

This album is all about themes: living in reality, being alone, longing for happiness and not knowing how to get there, the dichotomy between and the joy and the pain that comes with growing up, self improvement. This record has true depth and soul, and these themes are to thank. I really respect Paramore for being as open and vulnerable on this record as they were. It made a difference.

The drumming on this album is exceptional. I wouldn’t have expected anything less from Ilan Rubin (formerly of NIN and Angels & Airwaves). Zac Farro was a great drummer and I knew I would miss him a lot but with Ilan, his absence is hardly noticeable.

The vocal stylings on this record are drawing a lot of criticism. Hayley does a lot of new things with her voice on this record. Of course we want her voice to sound the same as it always has – strong, intricate, rock chick belter outer – but I find her experimentation with different styles one of the most interesting things about this record. She is versatile and shows it by taking risks on this release. And she should, her voice is enormous and undeniably special.

Listening to this album made me think about how social media has changed the way I listen to music. Nowadays interacting with your favorite bands via Twitter, Instagram, Facebook, and blogs is so easy. Jeez, if you told me 15 years ago I would get a tweet back directly from someone in one of my favorite bands I wouldn’t have believed it. But the thing is I know a lot more about lives of my favorite musicians and the real back story behind the songs, and I wonder if that makes me a little jaded. Maybe it’s because as a teenager I was obsessed with late 80’s/early 90’s R.E.M. so decoding the mysterious content of their music was, in a way, a very personal search for meaning in life in general to me. But now I know exactly what Paramore was going through as they wrote this record, exactly who their significant others are and which songs are about them, who their families are, where they are from, etc. I almost don’t want to know that much because it affects the way I interpret and relate to their music.

It’s so hard not to compare this album to their prior releases. Paramore isn’t nearly as edgy, raw, and timeless as Brand New Eyes. This album is more produced, mature, eclectic, and multidimensional than anything they have done before – and that’s a good thing; over time any good band will, and should, evolve. Despite the repetitive themes on the album I can appreciate the honest and deep place they are coming from. What makes for better inspiration than pain and heartbreak? Would this be the only Paramore album I would take to a desert island if I could only take one? No. But I am so grateful to have their new music to just revel in. This record will absolutely be on heavy rotation for the foreseeable future. I actually can’t imagine turning it off.