After learning how to sew my own iPad cover, I promised John I would make one for him. I bought this Space Invaders fabric at Cool Cottons in Portland, Oregon on our cross country road trip in May and have been waiting to use it on something he really wanted.

Using the instructions and pattern I got at Gather Here during my sewing class, I cut out two pieces of interfacing…

…and two piece of fabric for the iPad case (for the front and back).

Next I ironed the interfacing layer to the fabric pieces. A note: interfacing is a sturdy layer that you can add to sewing projects to make a more stable, rigid, or strong project (clothes, bags, cases – anything). Most interfacing irons on, fusing to the backside of most fabrics with a heat-activated adhesive.

You do not want interfacing to touch your iron directly though – it will stick on there and never come off. The best way to avoid this is to put a layer of junky fabric between the iron and your project. A few months back John cleaned out his undershirt drawer. I took a bunch and cut them up to make cleaning rags. I used a large scrap to act as a buffer layer here and it worked perfectly. Yay recycling! 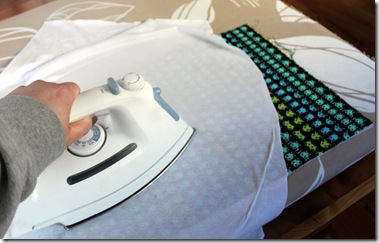 After about 7-8 minutes of ironing on full steam, the interfacing layer was fully adhered to both pieces of my fabric.

I quickly trimmed off any excess interfacing that went over the fabric edges.

I then pinned both fabric pieces together and sewed just the top together to create the top flap.

I then turned the flap right side out and pinned the bottoms of the fabric pieces together to form their respective pockets (one interior, one exterior – you’ll see). I then sewed up the edges of each piece to form the pockets. 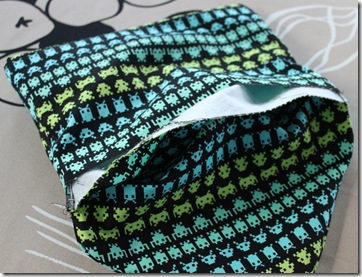 The final step was to sew a quick seam holding the interior and exterior pockets together.

That’s it – all done! Now John has a nice, sturdy cover for his iPad. Happy husband! 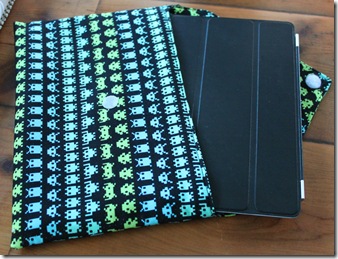