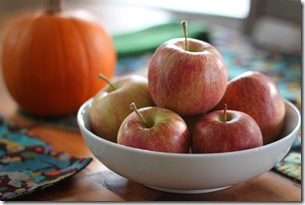 After our annual apple picking trip we had a bounty of apples to create recipes with. So this week Domestocrat going to feature all apple recipes. I’ve made a ton of unique recipes that I hope you enjoy. I wanted to try a bunch of diverse recipes; not just applesauce and apple muffins. My recipes are savory and sweet, main courses, side dishes, and everything in between. Enjoy!

Up first this week, apple potato latkes. This was ambitious for me because I’ve never even had latkes before let alone made them from scratch. But since we had our first real snow storm on Saturday night (yup, snow before Halloween, this winter is going to be awesome) we were craving comfort food. Latkes, or potato pancakes, are traditionally just fried potatoes but you can add virtually any other produce to them to enhance the flavor. I can’t begin to tell you how easy the recipe was and how delicious they turned out. Follow along!

The first step is to peel and grate your apples. You could totally use a food processor here if you don’t feel like hand grating. I don’t mind it and it went very quick. (Stay tuned for a recipe about what to do with all those extra apple peels!) 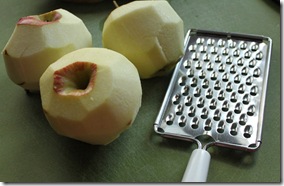 Place the grated apples in a small sauce pan with 1 tbsp. of butter and 1 tsp. of cinnamon. Cook together until the apples have wilted down and most of the moisture has evaporated out of them. This took about 15 minutes for me. The consistency you’re looking for here is like a very dense applesauce; not watery but not mush.

As your apples are cooking, peel and grate your potatoes. Then peel and grate your onion. Place the veggies in a strainer and press out the majority of the water. The onions were much more watery than the potatoes but you’ll get a good deal of liquid out of each. Discard the mucky water afterward. 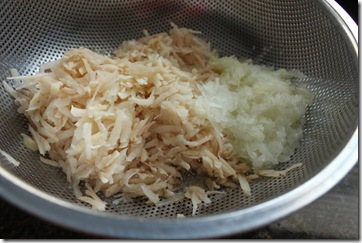 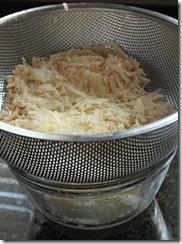 Once your apples have cooled and your potato and onion have been strained place them all together in a bowl and mix to combine.

Next add the flour, bread crumbs, egg, pepper, and salt (I used shallot salt here, more on that later in the week). Mix everything together thoroughly.

In a large saute pan heat 1/4 cup of canola oil over medium heat. When it starts sizzle drop in your latke. Each latke should be roughly about 2 tbsp. of your batter formed into a little patty. Fry in the oil until the edges brown then flip. You can press the latkes down slightly to help form your patty. Thin latkes are better than thick ones, they crisp better and cook more uniformly through the middle. 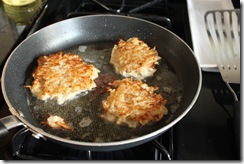 When you remove the cooked latkes put them on a paper towel lined plate to wick away the excess oil. As you cook your batch keep track of the oil level, if it gets too low just add a little more. You don’t want to add so much oil that they get soggy, just enough to immerse the bottom and crisp them. You’re looking for about 1/4-1/2 inch of oil in the bottom of the pan at all times.

Serve and enjoy! One popular topping is sour cream but we used greek yogurt instead. Greek yogurt can 100% of the time be subbed for sour cream. This was a great topping. You could add chives or green onion on top if you wanted.

These came out perfectly! Sweet from the apple but savory from the potato and onion. The crunch was great too. I will defintely be making these again!