John keeps a stash of pepperoni in the fridge at all times – mostly for snacking but I also have a hunch that he hopes it will subliminally inspire me to whip him up something special with it. Well, it worked. The dude loves a meat and cheese based bread so I knew he would freak out over this pepperoni and cheese bread recipe I came up with.

Like all of my recipes, the first step is to use really good ingredients. You know I’m obsessed with King Arthur’s Sir Lancelot flour; it’s light, soft, and gives any bread the perfect texture. John also loves this Wellshire Farms all natural, uncured beef/pork pepperoni. 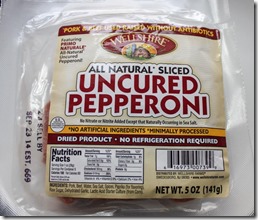 I also highly recommend King Arthur’s Pizza Seasoning – what a game changer this was in the dough!

Time to get started with the dough! Mix all of the ingredients (minus the cheese and pepperoni) in a stand mixer with the dough hook attachment on. Be sure to slowly add the water and only give the dough enough so that it comes together in a firm ball. 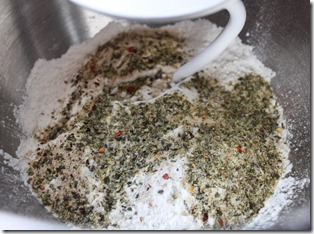 Here is one of my favorite bread baking tips. In the winter/cooler months it’s harder for dough to naturally rise as it sits out on the counter because room temp isn’t very high. To help the dough along I create my own steam box – just boil a pot of water, pour the boiled water into a cast iron pan set on the lowest rack in the oven, put the dough in a bowl on the top rack, close the oven door, and let it rise in there for 1 hour. Make sure the oven is OFF though! 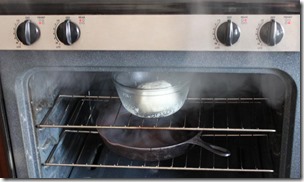 After the dough has risen/doubled in size, prepare to put the bread together.

On a floured surface, roll the dough out into a rectangle shape about 1/8 inch thick. 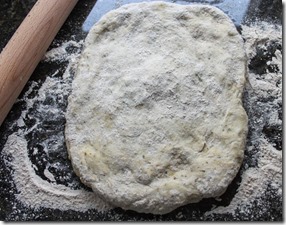 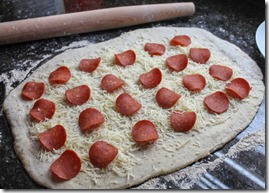 Tightly roll the dough up from one end to the other.

Use a little bit of water to seal the back seam as well as the folded over side pieces. Place the loaf seam side down on a parchment paper lined baking sheet and let it rise again (1 hour at minimum, I let mine rise for 4 hours at room temperature, no steam box needed here). 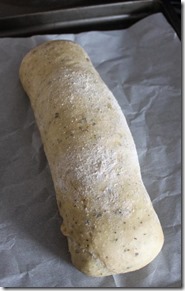 The baking method I used here is my go to baking method for any bread. First, preheat your oven to 450 degrees with a cast iron skillet and baking vessel inside. A word about the baking vessel: you can buy a very expensive cloche bread baker (a pricey unitasker) or you can do what I did and use a dutch oven. Mine is a Le Creuset but you could use anything that can withstand a lot of heat with a cover or lid. Sorry, there are no pictures of the next steps because it happens fast! If you’d like to reference some pictures of the baking process, check out my sourdough boule post.

Once the oven was preheated, I placed my bread dough and parchment paper in the middle of my Le Creuset. I then poured a cup of water into the hot cast iron pan and closed the oven door quickly. This allows the dough to be fully surrounded by steam. Steam creates an amazing crust and enhances the interior of the bread (you’ll see later).

After three minutes in the steamy stove, I put the lid on the Le Creuset and baked the bread like that for about 15 minutes. This ensures that all of the steam inside the dough will be trapped there while the bread actually bakes.

I then removed the lid and baked the bread for an another 10 minutes until it was a deep golden brown. Here is the final result: 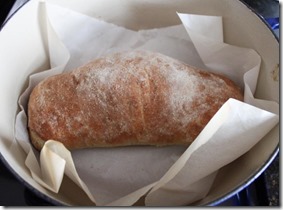 Slicing into the bread was heaven. It was soft and pillowy, and smelled fantastic with the pizza seasoning studding the bread and the cheese and pepperoni all warm and gooey. 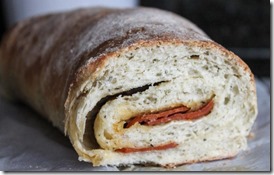 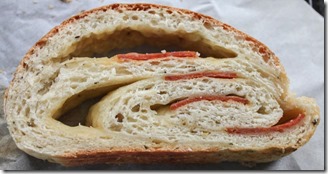 The steam really created a lot of nooks and crannies. I might try to roll the dough tighter next time though, I’ll be honest, it was perfectly fine like this. John’s only request? More pepperoni. Go figure. Enjoy! 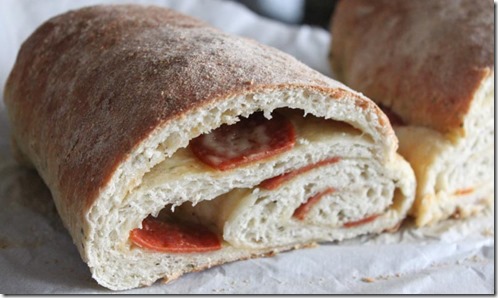