For some reason the spaghetti squash had eluded me until very recently. This winter has been all about discovering new gourds and root vegetables for me, and the spaghetti squash was number one on my list. Spaghetti squash is velvety and buttery like most squash. It also is high in folic acid, potassium, vitamin A, and beta carotene, and low in calories (about 42 calories per cup).

Ah, the spaghetti squash. What an awesome freak of nature. Looks like a plan old squash, right? Wrong! On the inside is something truly awesome, but you have to roast it up first to see what it is. 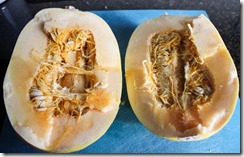 Next drizzle with olive oil, salt, and pepper, and give the spaghetti squash a good rub down – making sure that the entire surface is coated evenly. 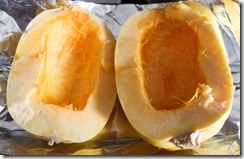 Roast on 400 degrees for an hour and a half. This is another thing I love about the spaghetti squash – you just let it roast and walk away. No checking, no turning, no temperature taking –  it couldn’t be simpler. I love foods that don’t require babysitting while cooking.

The texture looks and feels exactly like spaghetti! The taste is obviously different with the squash being buttery and light, however the starches are vaguely pasta-like. So cool and so strange. Another cool thing about the spaghetti squash is that it’s totally foolproof. Unlike getting the perfect al dente texture on pasta, the spaghetti squash seems to come out perfectly every time. No random underdone-ness or overdone-ness, just perfectly cooked squash every time. 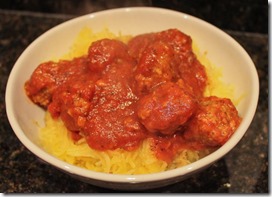 I have a bunch of spaghetti squash recipes planned for you this winter that I can’t wait to share. Stay tuned!

Have you tried spaghetti squash? What is your favorite way to use it?