This post has been a long time in the making because I wasn’t sure it would actually work. I’m not the best with plants; I don’t really have a green thumb at all despite having a family full of them. I’ve been able to keep the easiest of house plants alive with luck only (and water, I assume). We’ve had summer container gardens for the past few years which have seen some success but nothing major. So my confidence was not exactly high but I decided to embark on the following plant project.

On August 24th we went to the farmers market and I bought this huge bunch of mint. I knew I would have a ton left over and I hated the thought of it going to waste.

Since we had recently received our compost return I thought that maybe I could replant some of the mint with that. I did some Googling and found two different methods to replanting mint: 1) clip off a few cuttings and put them in water to grow roots and 2) just plant it and see what happens.

Clipping the mint cuttings was easy. I just clipped the mint plant right above a pair of leaves to shorten the plant and get a fresh end. I clipped three stalks and placed them in a cup full of fresh water. I put the glass on the windowsill in our kitchen and left it there. To be continued!

I also trimmed three more mint sprigs and planted them right away in a mixture of organic potting mix and compost. 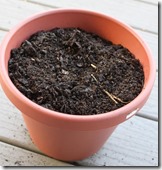 Sadly, five days later it was dead. That put an end to that part of the experiment.

Two weeks later (early September) I noticed that the mint cuttings has grown some nice roots!

Since I knew the plant was thriving and the roots were growing, I planted the cuttings in a mix of organic potting mix and compost that day. 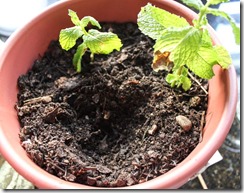 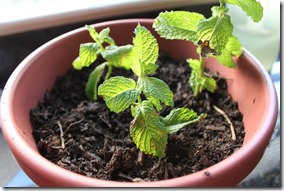 I put the mint on our front porch with our rosemary and cherry tomato plant. This spot gets good sunlight and since this was the beginning of September, and pretty warm out still, it was a good location.

After one week of being outside (mid-September by then), with plenty of sun and water, I noticed that the mint had begun to grow some new sprouts!

And another week after that (now late September), the entire plant was growing and flourishing.

Three weeks later (mid-October), the plant had grown like crazy! I was pretty impressed. At this point I moved the plant inside because we had started getting some chilly weather overnight. 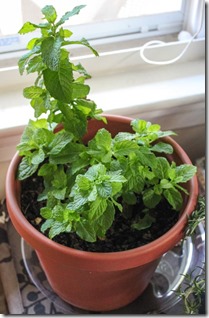 This brings us up to now – I’ve successfully kept my mint plant alive and growing for two months on my own. I’m not sure if it was me or the plant itself (I have heard that mint grows like crazy no matter where it is), but I’m really happy with how this project turned out! My plant remains inside and is growing still. I hope to have beautiful mint all winter long if I can keep it up!