I have told you guys before about how obsessed I am with King Arthur’s Vietnamese cinnamon. In fact, since I started buying it through their mail order catalog about a year ago, I haven’t used any other kind of cinnamon. It’s that good! It’s warm and savory but never bitter like many commercial cinnamon brands. The flavor is super deep and it’s very smooth. It totally inspired me to make this ice cream just to showcase what a fantastic ingredient it is. 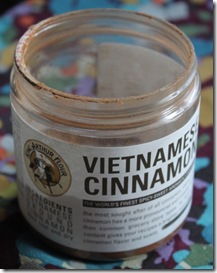 Add the milk, half and half, sugar, and maple syrup to a sauce pan over medium heat. Stir continuously until the sugar has dissolved.

When the sugar has dissolved add in the cinnamon, nutmeg, salt, and vanilla. Stir to combine and let the mixture cook together for about 5 minutes over medium-low heat. 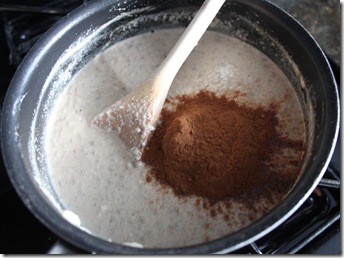 While the base is done, prepare the egg yolks for tempering. Whisk them together in a separate, heat-safe bowl. To temper the eggs: Take a cup of the hot mixture and slowly pour it into the bowl of yolks, whisking quickly and constantly. You have to do this slowly or you’ll end up with scrambled eggs. A good assembly line (see below) really helps!

I mix in just about 3 cups of my hot mixture before the temperature is up high enough to pour the entire bowl back into the sauce pan without scrambling the eggs. 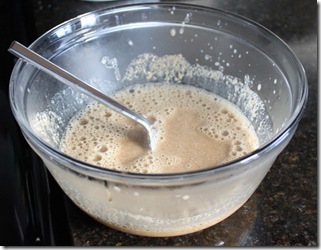 After the eggs are fully incorporated into the mixture (now a custard, really), return the entire mixture to the stove and stir continuously over low heat until the mixture has fully thickened. This takes 7-10 minutes. Don’t skimp on the stirring, if you do the eggs will separate and the custard will be ruined! After the custard is done, transfer it back into the heat-safe bowl. Let the batter come to room temperature and then put it in the fridge overnight.

When the batter has chilled overnight, it’s time to make ice cream! According to your ice cream mixer manufacturer’s instructions, mix the batter in the attachment bowl until it becomes ice cream. For my KitchenAid, this takes 20-30 minutes.

Look at all of the cinnamon-y goodness! Transfer the ice cream into a tupperware container and freeze. 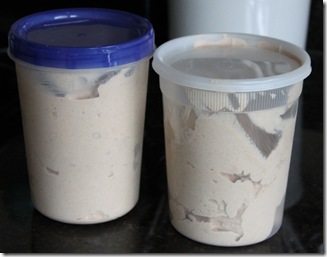 I don’t know how long cinnamon ice cream would last in your house but in my house it’s going to last for about a nanosecond. It pairs well with so many things (pie, cookies, hot fudge sauce) – I can totally see making this all year round!