It was chilly on the water in the upper deck of the boat but the views were amazing and the tour guide was excellent. 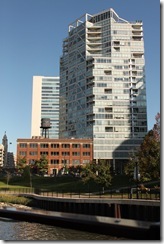 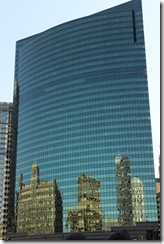 Watching the sun come up over the buildings overhead was really spectacular.

View of Navy Pier from the boat:

Cool view of downtown from the Southern-most part of the river:

My favorite shot of the Chicago cityscape:

After the river cruise we walked around downtown a bit. I love Chicago. It’s such a mix of Boston and NYC. But it’s clean, well labeled, and the people are very nice.

We ended up walking by the Forever Marilyn statue: 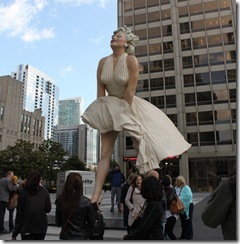 After walking around downtown for a bit, we took the train up to the North Side for lunch at Chicago Q. 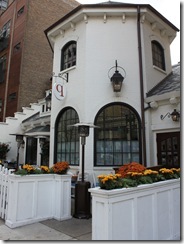 Stuffed with Q we headed to meet up with our Chicago Beer Experience group at Vaughan’s Pub. The Chicago Beer Experience is a beer tour that covers the neighborhoods of Lincoln Park and Lakeview, goes to four bars to sample 16 different kinds of beer, and notes all of Chiago’s beer history along the way. It was a really great way to see the city on foot and to learn about Chicago. 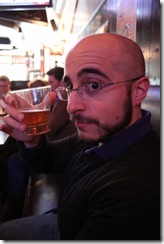 It was a good start to the tour. Our group was a little rowdy and our tour guides were awesome.

Next up was Paddy Long’s… 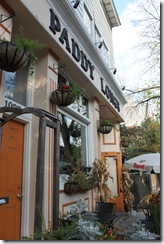 …where we did a beer and bacon tasting. Yum! 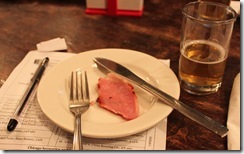 The third stop was Bodega Ramos, a lovely wine shop with a specialty beer section in the back.

Chicago brewed beers were the focus here with two from Half Acre and two from Two Brothers. Very good stuff!

Our last stop was Delilah’s, the bar where Kurt Cobain met Courtney Love. This one was a punk bar that served us Ommegang’s Witte. Can’t get better than that. 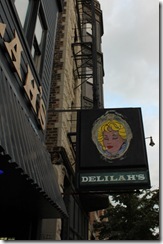 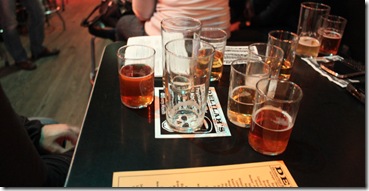 Souvenir of the day: Argo Tea’s loose tea Charitea (hibicus, cherry, vanilla). We stopped into Argo Tea after the River Cruise to warm up and I had a cup of this fresh brewed. It was so good I had to bring some home (even if the ambiguous glass container held us up at security in O’Hare on the way home).

Stay tuned for Day Three, the Chicago trip finale and my actual birthday!